LORDS OF THE WHITE ISLES

To sail the oceans of the world is to risk encounter with the self-appointed masters of the seas. With mighty fleets protecting their island home, the Arandai Empire rises and falls with the tides of time, but its reach is always felt across the continents. By the gleam of silvered armour, or by ordered cries from grand warships, you may know of the approach of the Highborn Elves.

Though the Highborn have retreated from many of their former conquests, they continue to hold outposts on islands and coastlines across the globe. Marshalled by the government of the Pearl Queen, Arandai galleons dominate the seas and control much of the global seatrade. Well-equipped garrisons display the deadly grace of the elves, honed over centuries of training and coupled with powerful magic. Highborn towers are circled by wondrous beings of legend, while inside, great minds apply themselves to dreams of splendour and glory. 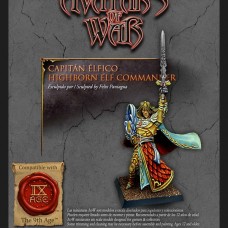 The Princes of the Highborn Elves are beings of great power, beauty and wisdom. Formidable warriors ..